September 22, 2019
Walking back to camp after splashing some water on my face from the campground faucet, who should I see but Mo and Lluc, walking hand in hand. Ain't that a sight to see. She got some days off and drove through the night to get here. The girlfriends have really come through on this trip... we did dream it all up before either of us had others, but aren't we lucky they still let us go?

It was reason to celebrate, so we rode into town got breakfast at the local diner down by the docks of Bodega Bay, the boats showing green streaks down their hulls in the morning fog.

Breakfast was also a powwow: the next week will be a more complicated maneuver than our everyday keep-heading-south M.O. First of all, San Francisco lay just under 80 miles away, too much for a single day (though some of the bikers at camp were going for it). Second, Mo and Lluc will be shooting from me here to take some time and visit a farm in the Central valley they're working on this Winter (afterall, we will have lives after this trip, and we can't put them off forever). Meanwhile, I'll be riding into the city alone, and spending a few rest days with various friends and family. Though San Francisco isn't exactly halfway, it's as good of a landmark milepost as we could hope for, so we're calling it halfway. Besides, we've only had one day off the bikes in 22 days of riding.

It was decided we'd do a short 40- mile day today,  leaving me another 40 mile day to do myself, tomorrow. Though, the 40- mile sections couldn't be more different: today, a gentle ride on HWY 1 through farmland of Sonoma and Marin counties. Tomorrow, a breadcrumb trail of side streets and bike paths through the suburbs of the Marin headlands and over the Golden Gate into the City.

The diner was busy (the owner's daughter had been married the night before, so they had opened late, and there was a line outside the door), but we pulled out the maps and decided on Olema, just south of Point Reyes Station. Mo went ahead to find camp, and Lluc and I started out, a little later than usual but well fed. 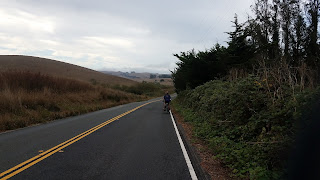 It was a little overcast, and the hills were dull brown, looking softer than they do in the full sun. The 1 turned away from the ocean into the pasture land of Sonoma county. We came to a rest at the top of a hill,  and I turned to Lluc and said "I think we made a wrong turn. We're in frickin' Yakima." The dry hills and grey sky did really look like Eastern Washington. 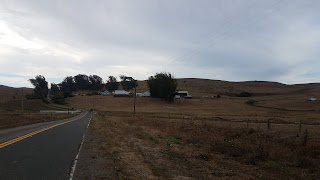 We rode through Valley Ford and entered Marin County, though we only realized when the HWY mileposts turned from 'SON' to 'MRN'. 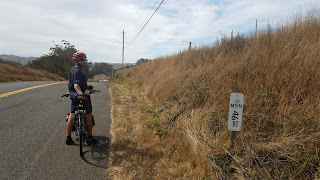 We stopped in Tomales, 9 miles later as the sun came out. It was a classic western town: Hotel, bank, saloon, all in a row down the main street, each with a conjoined covered walkway/porch. We ate some left over cheese from last night and some outrageous figs from the farmer's market in Gualala. We stepped into the Saloon (oldest saloon in Marin) to ask for some water. The man smiled as he filled our bottles behind the big wooden bar, "Everyone's thirsty today." 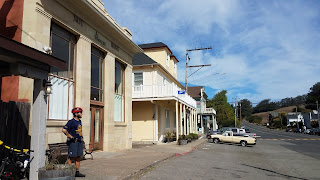 After Tomales, we rode along the Tomales bay, which at first looked much more like a resovoir than an ocean bay. It was very calm and surrounded by the same hills we had been riding through before, without hardly a beach. But as we rode South, bounding and bouncing along the hilly rode, the land across the water began to get greener and greener, and rise above the water: Point Reyes. We rode last several oyster shacks, each with an incredible, salty-smoky odor eminating from them. The patrons also were surprisingly hip. These are some city folk. 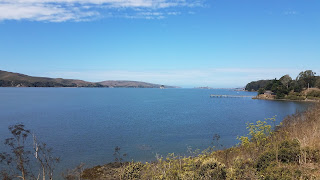 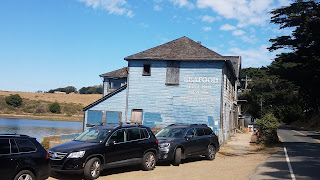 Point Reyes Station was the same: a little town as an urban resident would dream it: quant shops selling home-crafted trinkets, a respectable creamery, a clothing shop specializing in local wool and organic cotton... All good things no doubt, we enjoyed walking around, but it's obvious where the money comes from. 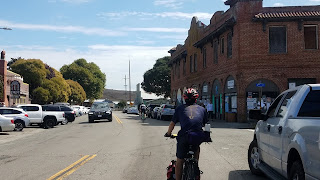 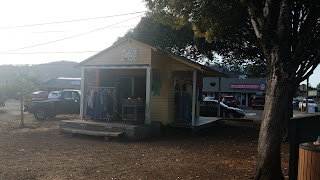 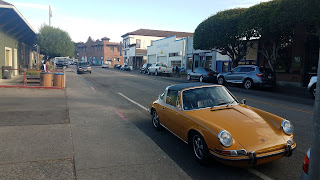 We camped in Olema in a campground behind the Catholic Church. Laundry, showers, charging of devices, drying and cleaning equipment... all the necessary tasks were done in the afternoon, and in the evening, we cooking a infallible lentil dal, with sheep's milk yogurt (yes, from the creamery), and rye bread.

Tomorrow, we go our seperate ways, but not for long. Lord knows Lluc and I could use a day apart, for we haven't hardly had a minute without eachother for 3 weeks. But I wondered alound. "who am I going to call 'CAR BACK' to?" I challenged him to go a whole day without even thinking about a bicycle. That would be a good break: or bodies are fine. 40 miles is a walk in the park now. But getting in the saddle day after day after day, that's where you feel it. So a break well needed, and I'll see him on the other side of town in a few days.