September 24, 2019
I emerged from my tent as Franz, the older German man who was camped next to us was rolling out off camp. An early start, but he is a little slower-- we've passed him several times. Don't think we'll be running into each other in San Francisco though... "Guten morgen!" I hollared after him. There was a grunt from the tent. Lluc thinks its me yelling at them, "Lluc and Morgan!"

I dry my tarp and tent in the rising sun and starlings hop around it. I pack up while L&M discuss their day. By nine, I'm ready to roll. San Fran: here I come.

Short goodbyes and see you soons, and I'm headed up the Bolinas ridge. A nice big hill to start the morning. Rolling through farmland, I think 'what a transition I will see today.'

Down the other side to a bike path through Samuel Taylor state park. Bike paths are such a treat. They really can make my day.

Deep trees and winding shady brooks brought me through the San Geronimo valley. I passed several small towns which obviously had been rural villages at one point, now the escapees of ex-Franciscans. I took a pause in a streambed by Woodacre. 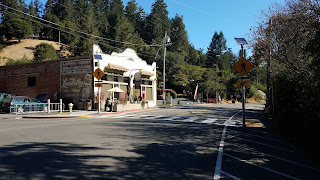 Riding alone is such drastically different experience. I so easily drift off in my own head. that I pedal by things in a kind if daze, passively taking it all in, never feeling like I'm going too fast or too slow-- just simply going. So often though, I find myself wanting to point things out that I see or smell or hear, things I cannot stop to photograph or make a note of. These things only a riding conpanion can experience. There is a richness to this journey that can only be experienced in person.

There was a soaring downhill that caught me by surprise after Woodacre, and at the bottom, I rolled into Fairfax. A clean downtown with curving streets and many little shops. bustling at this time of the morning. I rode down the main drag and then ducked through some side streets with many small houses in the puebli style, cactuses and small trees growing in the front lots. I could far more easily lo ictire growing up ina. place like this than many of the others we've ridden through. 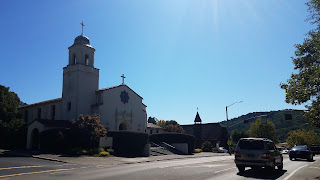 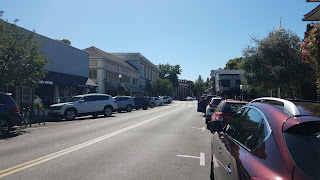 Fairfax blended in with the next town, and the next town, more alike neighbirhoods than towns, positioned along a winding valley. Fairfax, San Anselmo, Ross, Laekspur. Finally, I turned up a winding road called the Camino Alto. I thought I saw a glimpse of the bay on nt way up, onto to be greeted with this at the top: 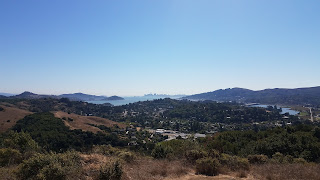 I relaxed for a while in the dry grass at the top of the hill and took it all in. I don't often get to gaze down at my end destination.

Down the hill, I rode through the Mill Valley on a bike lath through some wetlands. Lots of folks out enjoying the day. and I realized how much more diverse the people are here rhan anywhere along the coast yet. And I'm not even in the heart of the city yet. 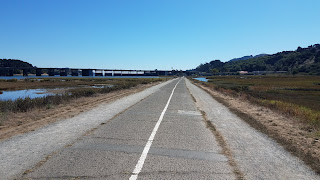 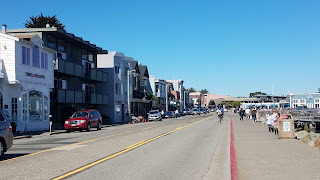 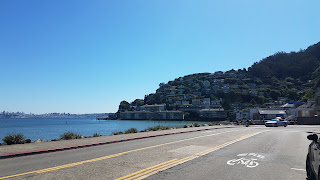 Stopped at a bike store in Sausilito to pick up some supplies, and asked the fellow "so, how do I do this bridge thing?" He was kind and showed me on the map exactly where to go. "Where ya headed?" "The Mission." "Take Loncoln to Chestnut, then a right on Polk. That'll take you right there." Nice.

Up and over another rise and it came into view. Wow, that's a big bridge. I enjoyed the sight from several angles before making my way to the start of it. Big crowds of people taking pictures etc... I asked for one. 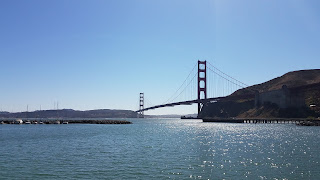 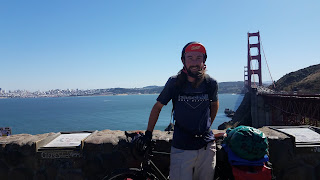 The West side was closed to bikes, so I had to share the sidewalk with all the tourists and everyone else. Unexpected challenge: I had to carry my fully-loaded bike down and up and flight of stairs to get to the other side. A bit of a maze, but I was making it across, when suddenly there was a back up. Cops were holding everyone up. "What's the story?" I asked anothet biker. "Some jackass is up on the wires and holding everything up." I looked over and saw a figure sitting calmly on the big red wire, looking out. The cops were climbing up to get him. I rode back off the bridge to let things cool out. Had a snack and rode back 10 minutes later and it was as if nothing had happened.

It sput me out in the Presidio, and I wirked my way through that big ex-army base (I think?), before being dropped in Cow Hollow. Here I am. Surprising calm for the city. Kids were walking hime from school, music played out of windows... A lot less chaos than the bridge. To Polk street and I started working my way up the hill. Met a man in scrubs in the bike lane as I turned onto Market st. who talked to me a while and helped me find Valencia, which I took to the Mission. A nice dutch lady on an e-bike chatted with me a while there... Hadn't even gotten off the bike and I was already meeting people! 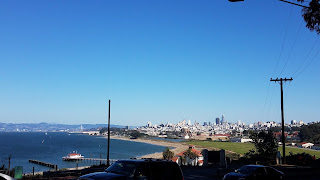 I found the address of my old friend Charlie, who I hadn't seen for probably 6 years. He had just moved to the city, and though he was subletting, offered me the couch. He met me at the iron-gated door. Hugs, unloading, and bike up the stairs. Shower, and long catch-up around the kitchen table. There was free bowling at the place down the street, so we bowled a couple rounds, grabbed some cheap tacos, and walked up to Corona Heights to take in the night lights. Not a bad entrance to the city. So good to have friends spread far and wide. 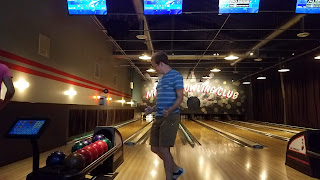 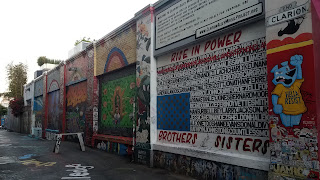 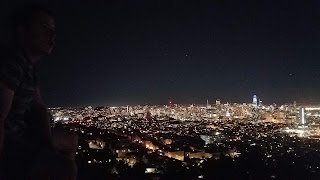 I'll be here a couple days, resting. resupplying, and getting ready for the next chapter. We shall resume the saga at the end of the week...