September 28, 2019
There was a dense fog over the city in the morning. It seemed to know it was time to get back to business. I must say, I really did enjoy my rest days in San Fran, and Lluc seems refreshed too, after some time in the Central Valley. Quality lady time for both of us... that probably has something to do with it. Sounds like there was some pig feeding and good eating, some pleasantly warm days in the surrounds. I was extrenely pleased to have hit nearly all of the things I had wanted to see in the city, and was given countless more; the Morrison Planetarium, the Fillmore, City Lights Bookstore, Baker beach, and all the various neighborhoods. I remarked that it felt as though I walked through 5 different cities just in the span of a day. It is incredible too to see it built upon those same rolling dry hills and rugged coastline cliffs we have been riding through for a week or more. It does stands out, a marvel in itself. 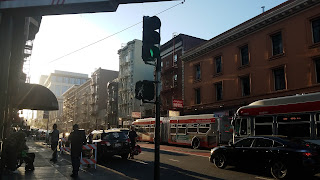 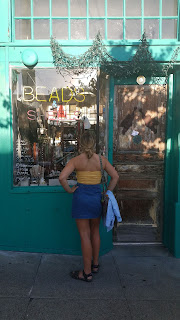 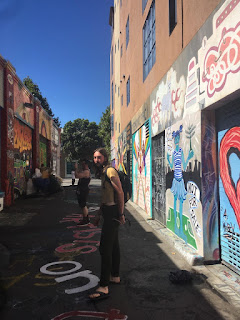 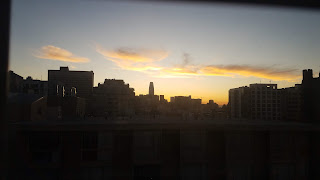 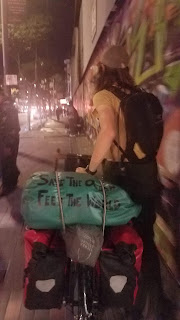 I gathered my things from my dear cousin's apartment in which I had been crashing for a few days, and loaded up again, fitting it all in the elevator (just barely), to get to the bottom floor. 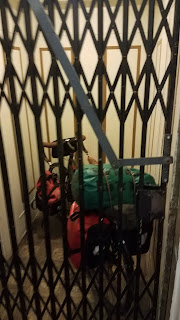 I grabbed a few last minute supplies and a bagel for breakfast before meeting Lluc at the Civic center, just outside City Hall. Seemed like a good central location. Lluc had ridden in on the Ferry from the East, getting an equally spectacular view as I had gotten from the bridge. We met with smiles and caught up briefly, but the road was waiting. We made our way down Market to Haight, which we took all the way to Golden Gate Park. There was some tight places with traffic and I somehow snagged a pannier of mine on a truck wheel that I was weaving around. It bent part of the front rack and it was making an awful noise. Luckily there was a bike shop down the street which had an extra bolt and a wrench we could borrow (big thanks to the guys at American Cyclery, SF!). On the spot surgery and all was remedied. 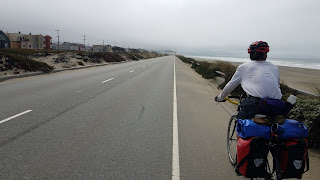 We rode it clear to Daly City, where the fog got so thick, we couldn't see where the top of the hill we were climbing was! Just keep pedaling and hope it ends soon...

The houses were all lined neatly, about the same size, each with a little 10×10 front lawn. Some choose grass. Others had rock gardens and cacti. Some were woodchips, some tiles. Others just had a car on it. 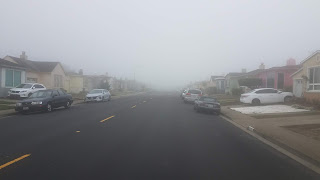 This kind of residential area continued until Pacifica, at which point HWY 1 took a turn and rose up into the hills before diving straight into one at this tunnel, which must have been nearly a mile long. 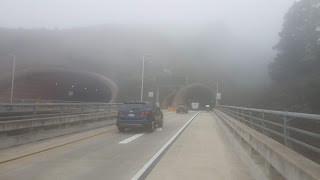 There was Half Moon Bay, which did indeed have a lovely crescent-shaped bay and some nice looking waves. We got something fresh to have for dinner there before going on towards Pescadero. It became largely rural at this point, and it was amazing to wonder again at the speed of the transition. The fog stuck around, and it was dampening us with a light mist, but we had a tailwind, which was grand. In the distance, a shining break in the fog appeared and slowly approached. When it made landfall, we took a rest on the rocky shore. 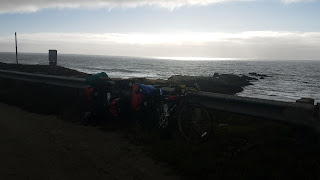 Luckily, some folks I had reached out to for a place got back to us, and we didn't have to find a place to hide out for the night on the water.

Past the little farming town of Pescadero, we came to a dirt road. This was the one. The jeep track rose sharply over a 1/4 mile up into the hillside. At the end we were greeted by a quaint yurt. 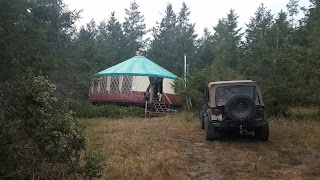 Rhea met us there (after the dogs woke her up from her nap) and she lef us camp just a little ways downhill, and even shared dinner with us. We contributed some vegetables and we had a splendid meal. During dinner we learned she was a psychic and a medium, so she gabe each of us a reading and some wonderful advice for the rest of our journey: "Use you talents and gifts knowing that every good and bad that you do reverberates out into the universe. The Earth is much more dense than other worlds and it's harder to feel vibrations here, but you can amplify yours by eating well, excercising, and meditating. If you ever are not sure of a decsion, put your hands on your heart, ask aloud, and feel. The vibrations will tell you." Excellent words of wisdom.