September 28, 2019
The clouds appeared to be splitting above the trees as we roused. I gave a card to our host when we were ready to make our way down the slope. In return she offered us recommendations to about every food establishment from there to Monterey, and a couple in Baja. They all sounded good but weren't particularly useful. Though, she did recommend a side road to take from her place in Pescadero back to the coast. I'm very keen on local's advice on alternate roads, especially if they bike. So we said thanks and followed her directions down the Cloverfield highway through some lovely farm country (some very happy chickens and pigs) to the Gazos creek road, which wound its way following the wooded creek to the ocean. 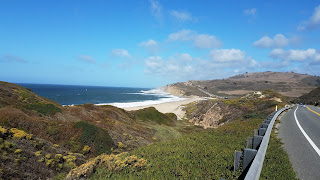 There was a strong North wind, which we were very glad to discover. A little boost from mother nature. Riding with a tailwind, we made great time all the way to Davenport. It is an odd feeling too; all around the plants are dancing, but on your bike you hardly feel the wind because you're going the same speed as it. It's as if you are pedaling in the still air of a room. But you notice it when you can stay in 3rd gear nearly all the way up a hill. 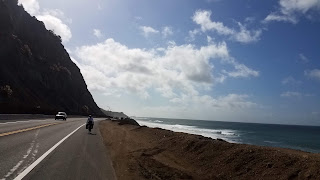 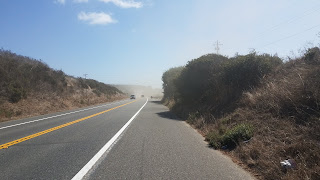 We stopped for a snack there by some old railroad tracks, but didn't stay for too long. In another hour, we came into Santa Cruz on a good bike path, that spit us out onto the boardwalk. We took in the sights and watched the little cats go screaming by on the roller coasters of the amusement park. There was good signage of the bike routes so we followed them through the neighborhoods that followed downtown, passing several surf spots that were rather popular. There even seemed to be a competition of sorts happening at one (an announcer and paramedics and everything!). 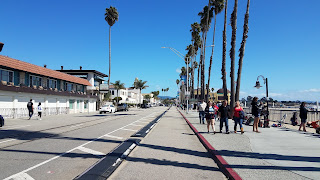 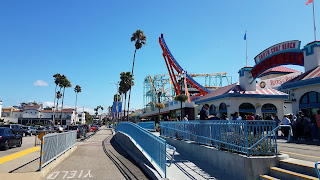 We found ourselves in Capitola, which had a dense and put-togetger downtown corridor with many lovely shops. I saw a sign for a sand castle contest and took a stroll to the beach to make my own judgements. My favorite was the 'Pesado Gaucho'. 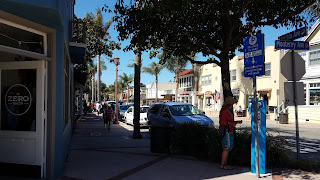 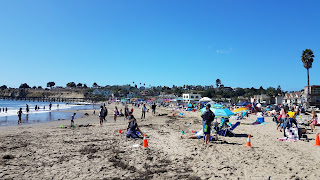 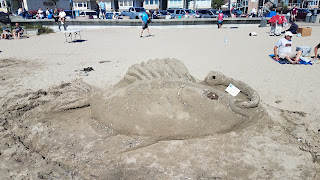 There was a lot of tourists on the beach having picnics that all looked tasty, so when I saw someone toss two half-empty (half-full!) milkshakes into a dumpster, a pounced and Lluc and I had ourselves a treat.

There were some other towns that followed, difficult to differentiate, Soquel and Aptos, but the city faded into farm fields before long. Brussel sprouts forever... 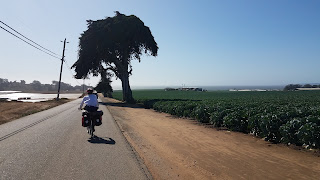 There was a state beach nearby, but not much for the next 20 miles, so we called it early in the afternoon; a nice reward for making such good time in the wind. Instantly realized how good we had it when we turned right to go towards the coast and we both turned into sails getting blown all around the road.

There was another biker in camp who exclaimed as we rolled in "company!" Will would soon become our notable character of the day... and he was rather talkative. He wore an oversized flannel, jack daniel's ball cap, paint-stained shorts and thick square sunglasses. He had been here the night before and collected enough bottles and cans from the recycling to turn in and pay for another night. We went right along unpacking as he went right along talking. He was smart, if not a bit of a maniac, but he had some real style, as he smoked 3 or 4 cigarillos during the time we talked. Electrical engineer with a math and physics degree, he had worked in the Berkely labs for 10 years designing switches that may or may not have been used to detonate nuclear weapons (he wasn't proud of this). Lluc excused himself for a shower, so I got both earfulls, but learned a great deal. He certainly knew his stuff, though he touched on nearly every conspiracy theory out there with a sprinkling of biblical/angles/demons and alien/UFO references. It was a little intense, and comical, but somehow I couldn't stop listening. Where else could I learn how UFO's use a pair of centrifical plasma orbiters to do non-gravitational flight, how Dick Cheney orchestrated 9/11, or how why Luke 9 iis the best chapter of the bible? He actually said enough reasonable stuff between these more outlandish claims to make his convictions more credible, but at the end of the day, it's hard to know what to believe.

Lluc and I took a stroll on the beach before dinner, observed some occupied curlews on the wind-blown sand, before doing some bike maintenance as the sun went down. A big day tomorrow: Monterey, Carmel, and hopefully, Big Sur.