September 30, 2019
We were low on breakfast in the morning, and hungry, so I borrowed a few strawberries from the fields next door to us at sunrise (with all this acreage, they wouldn't miss a couple). Lluc scrounged a muffin from a dumpster somewhere and we ate well. Will was up with us, already getting kickstarted on his day of jabbering on about how my aluminum pots are going to give me dementia, and how the US government has nuclear fission technologybut doesn't want to use it because they're making too much money off of oil. I hadn't the patience for it at that time of morning, so we left pretty soon. Felt bad to leave Lawrence from Kansas City-- another friendly hiker/biker in the camp-- there with him on his own.

The air was still now, the winds of yesterday clearly having moved somewhere far away. We ride through wide open fields off brussel sprouts, strawberries and artichokes for some time. A produce standwith a sign for 7 kiwis for a dollar really caught our attention, and we made a stop. Also, it's not october yet, but the pumpkins are out in full force. 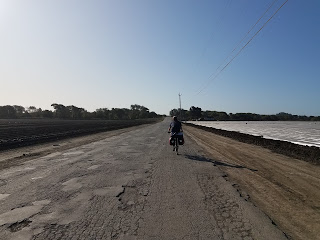 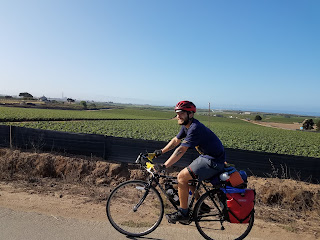 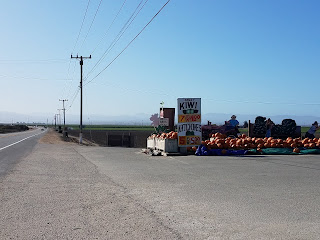 There was a bike path we cought near Marina, which brought us all the way into Monterey, though it went through some dunes, and they seemed to be taking priority over the path in many areas. We had to walk our bikes over a few sections. No wonder with all the this wind! Such good wind, there were folks paragliding dust above the water. It looked like loads of fun. With a view like this? Not bad... 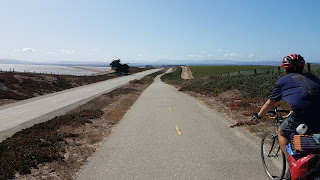 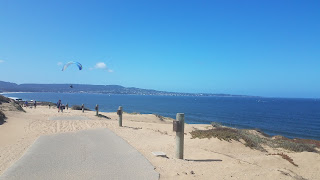 In town we found ourselves at the wharf, took in the scene, observing two buskers with guitars competing for the tourists' attention from opposite ends of the square... 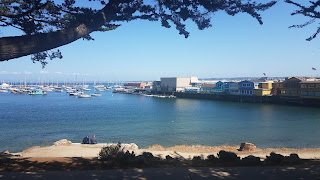 Our friends at Oceana have a regional office in Monterey, and we were exciting about maybe getting to see what they do, but unfortunately, it was Sunday, and there was no one un the office. We're so much in the 'Day 20-something' headspace, it only occured to me as we saw rhe empty office. Oh well. However, it may have been meant to be, for it just so happened that on this day, a rather well-known and respected ocean activist was in Carmel, whom I was connected with via by friends at my Alma Mater (go Skiddies!!). Wallace J. Nichols is the guru of sea turtles in Baja, founder of SEE Turtles, Research  Associate at California Academy of Sciences, and Author of 'Blue Mind', which explores the merging of cognitive science and ocean exploration. He's also a friendly and generous dude who took some time to sit down with me at a cafe in Carmel to talk about the ocean. I asked him the same five questions I try and ask anyone who is willing to have a deep conversation on the road. Here they are, in case you want to think about them too:

What does the ocean mean to you?

What to you is the most serious issue facing the ocean?

In what ways do you help or hurt the ocean?

Do you think food security is an issue in your community? (Does everyone have access to enough fresh, nutrioutious, and affordable food?)

How could more sustainably managed fisheries address food security in this area?

We talked of these things for nearly an hour, but because the man in rather knowledgeable in this area, the conversation expanded and flourished. Talking with him re-inspired me with a new perspective on 'Why': why the Pacific coast? why now? why bikes and fish? If you're interested in hearing more, I'm writing a seperate post on all of that, so I recommend checking that out.

We parted in good spirits and I made my way out of Carmel. Though the downtown was nice and all, it clearly wasn't made for the likes of us salty bike bums. Lluc haff that feeling quick, and while I was talking with J, made his escape and picked up some supplies on the edge of town. We need things for the next 2 days at least; coming up was Big Sur. There's only two little towns with shops, and a whole lot of rugged coastline in between, and I anticipate taking us a while to get through with all the climbs, and narrow road. But also, the right setting. This section of the route I've been very excited for after I've had so many people hype it up. After Monterey  and Carmel, I'm ready for a lack of civilization for a while. 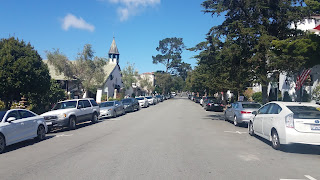 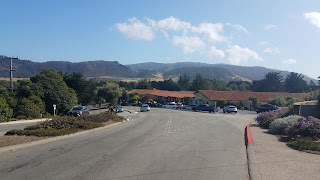 We road out of town at 4 with 28 miles yet to go. Later than I would've liked, but heck, it's the golden hour and I don't mind a late dinner with all this scenery. Immediately after Carmel Highlands (some very fancy homes) the coast arose to mountains to the left, dropped away into rocks on the right, and the highway found its way somehow in between, over some spectacular bridges. We were ecstatic. Nevermind all the people with thier smart phones pressed against the car window as they drove past, we're out here feeling it-- breathing it-- living it. There were some zesty climbs, no doubt, but by 6pm, we had made it to the town of Big Sur (most well known town of 200 I know of), and pulled into the hiker/biker nearby not too long after. We agreed: that was a spectacular day of riding. 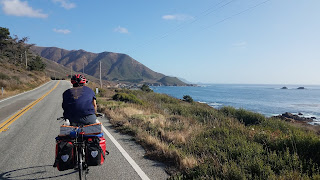 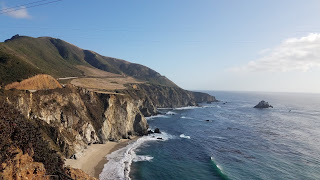 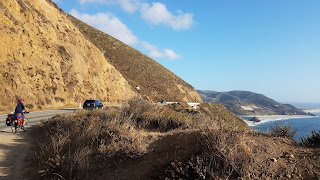 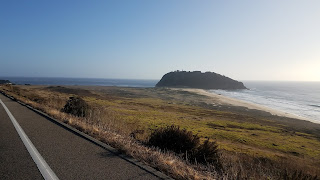 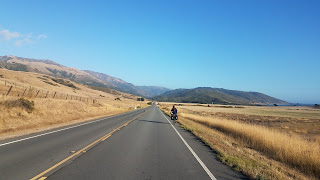 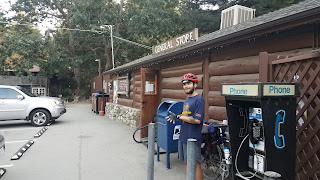 Made some new friends at camp and even shared a campfire and a s'more with them. Kansas City Larry pulled in after dark and he joined us too. All's well that ends well. And tge best part is, it doesn't end here.