October 25, 2019
I heard Pancho and his boys around 4, getting ready for another day of fishing. We were slower to rise. We aimed for a shorter day today, riding along the Bahía Concepción to put us in a good place to shoot for Loreto rhe next day. Besides, we had heard such good things about the bay, it seemed worth a day.

Over oatmeal with ripe plantains, a hummingbird with a purple face flew directly up to mine and stared into my eyes for a moment. And a good morning to you too, little fellow.

Lluc had thought of staying in Mulegé for a while, and letting me ride on alone, but a short day along the bay souded appetizing, so we rode together on an unsaid agreement that we would play it day by day.

We rode back through town and over the river. There were a few steep hills that brought us around the cliffs between the hills and the water. We only rode for a few minutes before the first sweeping panorama of the bay came into view. The stil shaded mountains cradled the crystal blue ocean like wrinkled hands cupping water from a well. At their bases, a smooth green carpet flowed gently into the ocean. Mesquite trees blanketed the rocky ground and tall cacti punctured their short canopy like the persicopes of desert submarines. 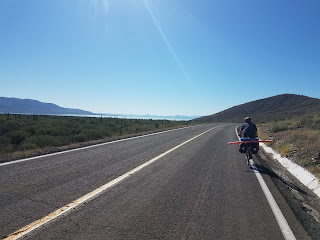 Around a few more bends and then we saw it; a beach with thatched huts, sailboats harbored, almost levitating on the clear, carribean-blue water just off shore, and islands, rocky green dots scattered about. A more inviting scene I couldn't dream. We were pulled in, magnetically, and found oursleves on the beach under one of those huts, smacking our lips and staring at the shimmering reflection. Wow. Another group of cyclists were there too, 3 Mexicans who had ridden from Tijuana. They were going south to Cabo as well, but it looked as if we might beat them; a Tequila bottle lay open and two of them were lying on thier backs in the shade. The third attached his school backpack to the bike's rack with rope. As we rode out, they asked, "Tienes un poco de weed?" "Lo siento, compadre." 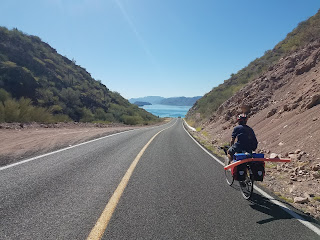 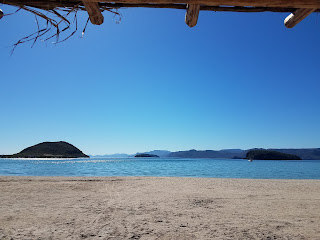 There were more bays like that one, each a more intriguing formation than the last. With these ingredients, it would be hard to make something far from perfection. 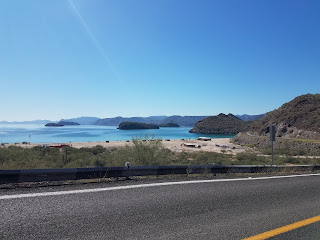 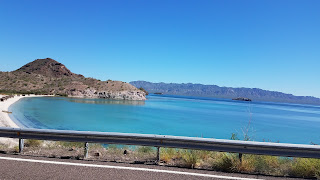 I knew that in Coyote Bay we might find the NOLS Mexico branch. I had completed a NOLS semester 6 years ago in the Rockies and I owe no small part of the skills and confidence that made this trip possible to them. I thought it would be worth stopping in and saying hello.

We found the base just off the road and rolled in. It was a large compound, with bright white buildings surrounding a tree-shaded courtyard. I walked into one and explained myself to the kind woman there who then brought me up to the branch director,  "Suza, you have a visitor." They were all kind and smiling, excited about thr trip and offered us a tour of the branch and to stay for lunch if we'd like. We liked. 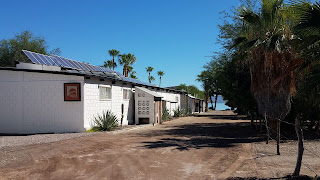 Nick, showed us around the place and I fell in love very quickly; 100% off-grid compound with solar power, greywater collection and reuse, dry composting toilets and walls made of old sailboat canvas. Heck yeah. Not to mention all the sweet boats they had. Beautiful 22 foot sloops with centerboards and a vast fleet of seakayaks. I love my bike but these things were really making me want to pull a switcheroo and go the rest of the way to Cabo by water. The map room sent me over the moon and I asked to many questions anot the road from there to La Paz and took notes voraciously. Best of all, they had a gear room which was the largest collection of outdoor gear we've seen in one place since I bought stove fuel in San Diego. Score. 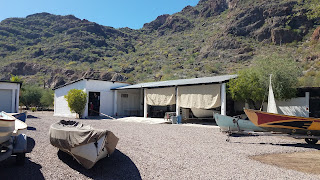 Lunch was served and we all ate together out in the patio by the bay. It was the first real sit-down lunch we've had in weeks and the idyllic surrounds added to the flavor. Conversation was a pleasant and I was happy to remeber how tight to NOLS family is; they knew a whole bunch of my instructors from my course well. We did dishes in thanks for the food, and with the heat of the day setting in, decided to let it blow over and take a load of at the bar across the road. 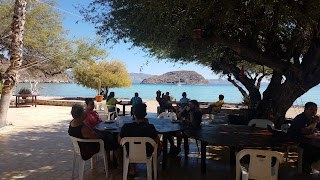 There were a few gringos there, and by the looks of the bottles in front of them, they had been there a while already. We were warned by one of them: "Don't spend more than a couple minutes down at the beach, it's addictive. I came down 10 years ago and never left!" They were a funny bunch, and as always had plenty of bars to recommend on our way down, friends of theirs to say hello to...

By 3 o'clock we were loading up and again and even got some goodbye hugs from the staff. Lunch and hugs. Didn't know how much I needed that. 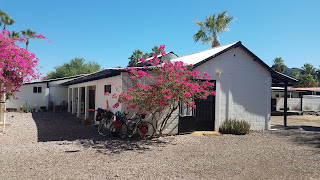 The wind blew harder now and we cruised along the shore. It was still darn hot but we got share now and again from the cliffs that the sun was now falling behind. There are few words I can use to describe the scenery, but I got that favorite of all feelings of bike touring; the one that makes you laugh out loud, smile, and pedal a little harder. This is absurd and I love it. 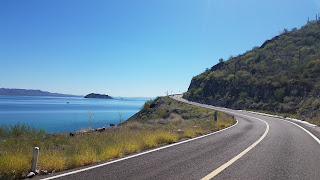 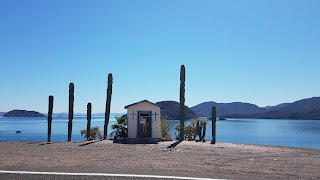 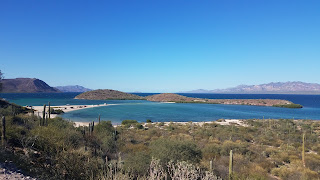 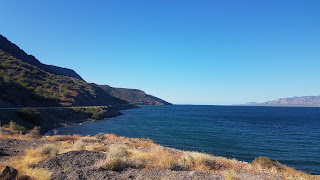 We pulled off the highway onto a little gravel path and found a place to hide near a pebble beach where something had spent a lot of time pulling shells, man or sea, it was not clear. We lay on the rocks and let our tires soak in the waves for a while before seeing up camp. We watched the mountains across the way ignite in pink and later the stars emerge like faces on a film negative hanging on a darkroom drying line. Every shell we found was a masterpiece. Every stone we skipped broke a record. We were full of wonder, at this thing before us and at all the things before it.