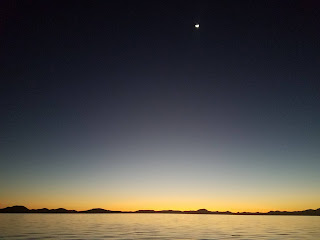 The bay settled into an ethereal calm during the night. The waves ceased lapping on the stones and shells of the shore, and in the silence, the energy in the glow of the coming sun was a near audible hum. We sat on the water's edge, so still in the cauldron of desert mountains, it seemed like an alpine lake. The water rippled, alternating blue/black and a luscious orange. Lluc got up, stripped down and waded in. "I'm going to my people... tell my story," he teased. 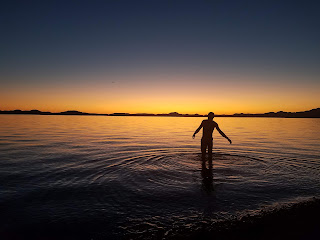 When the sun did come we rolled back up to the carretera and began our ride, down around the bottom of the bay and up over the hills on route to Loreto. The first climbs made no attempt at easing us into our first 60 mile day in a while. They were tough and Lluc began to lag behind me. I waiting for him at the top of each rise, not wanting to be too attentive, but wanting to keep him in sight. His back was hurting bad and after a few more stops he couldn't go any further. No point in trying. He was beat and fed up. Anyone who's had back pain can agree, you aren't in the mood for anything in that condition. A few trucks had passed and perhaps he could get a lift to Loreto. I urged him to go just a little further to a truck stop I saw on the map. Might be easier to hitch a ride there. He was reluctant, and very close to throwing in the towel right then and there, but he agreed and coasted there without more than a few pedals.

There was a little yellow pick up parked outside the Lonchería 'Las Palmas' there and Lluc went inside to see who owned it. He asked and after a little translation help from the bar owner, got a lift. 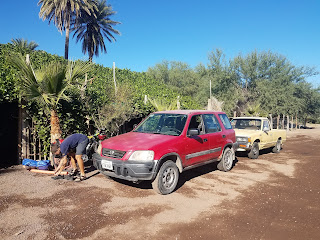 I got some water from him to continue the rest of the way alone, and loaded up next to a little roadside alter. "Good sharing the road with you this far." We had a small hug. It seemed an odd place to split after so long together, but this wasn't the time for sentimentalities. 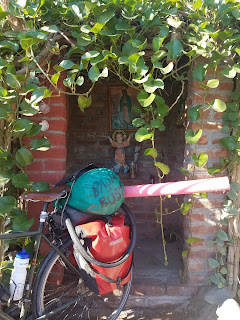 So I rode on, quickly at first, almost as if I had to prove I could do it to myself. Every time I thought I should stop I thought, 'I can go a little farther.' I had gone 45km before I did and I sat under a mesquite tree by a fence. It was quiet but thoughts and voiced ideas in my head kept kept me company-- perhaps too much. The mountains were gigantic and it was green everywhere, and that terrifically blue sky, terrifying and tranquil. The road was entertaining enough, with small rolling bends and hills but without too many large climbs. There was little wind, so it warmed up and I've taken to using a bandana in the side pocket of my backpack as a sweat rag. I need to wipe my face every few minutes to keep the sunscreen and sweat from going into my eyes. 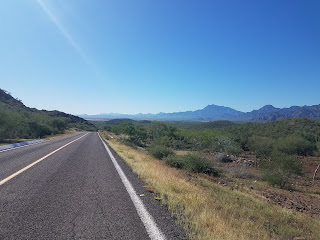 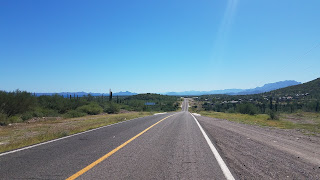 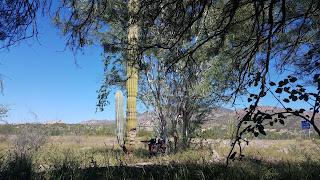 Past a military checkpoint I came across two cyclists on a tandem/semi-recliner bike. A fascinating machine. They were a Swiss couple and were looking for a buff they's dropped. We were 25km from Loreto and they had come back on their day off there to look. Must have been a great buff...

I made it to town and guided myself to old town where Lluc said he'd meet me at the Hotel Junipero. I went in and asked if they'd seen a fellow with a bike check in earlier, but they hadn't so I asked for their wifi and got Lluc's message. He found a better place. It was around the corner by the old mission. 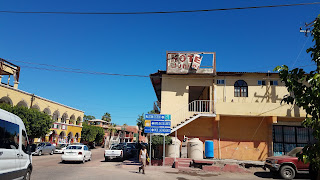 We rested in the heat and decided it was time for a rest day. Lluc's stomach was also feeling off and perhaps there was a sickness coming on, so this was the place to be. 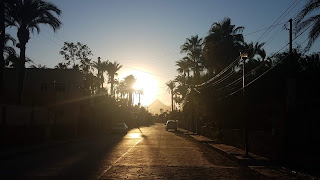 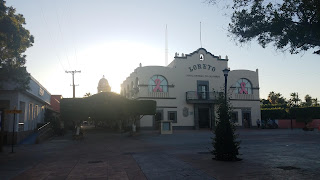 I went out eat in the evening and got a torta at a street stand, got up, walked along the street and got a tostada at the next one I saw. I was on my way to another when I stopped myself. The food here is so darn good and cheap, and I'm so insatiable, I could go on like this all night. Still, I can't resist something warm and spicy made by a nice mamasita on the roadside.

That night there was a show in the plaza. A mexican opera singer, Emma Calo, singing her favorites to celebrate the city's founding. Ther mayor and other important folk were there, but the AV crew was amateur and there were a lot of difficulties. A little embarrasing, but still an interesting event to spectate. 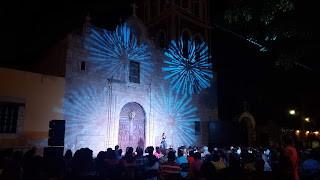 Tonight, we sleep in.