October 29, 2019
When I got in bed I thought perhaps I'd forgotten how to sleep in a bed-- my limbs felt uncontained and I sprawled in ever more absurd positions... but I got over it. I suppose I resembled a skant tostada on this hard mattress than my usual burrito of a sleeping bag.

I slept in but couldn't stay in much past 8 on our schedule. I walked to the market and came back with oatmeal and bananas. The hostel had a kitchen and it was nice to use real pots and a stove. Lluc rose and we ate. He was better but still very much taking it easy. 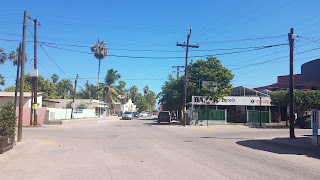 We took some time to talk about our options. It was casual and I told him I wanted to keep riding and I thought I could make it to La Paz in four days, if he wanted to meet me there before the last leg to Cabo. There was still a few days ride from there to 'land's end' in Cabo. It seemed like a good option though it wasn't a resounding YES. Neither of us were sure what he would do with himself that week, but the three prospects of having an open schedule that didn't involve 5-8 hours of biking daily was attractive.

I let him rest and took a walk back to the market to get food for the next two days to Ciudad Constitución, a large agricultural city in the Plain of Magdelena. Having spent nearly all my time either biking or seeking the things to allow me to keep biking (food, water, shelter), when all of these things are satisfied, I find myself without clear intentions, and I ended up walking to the beach. 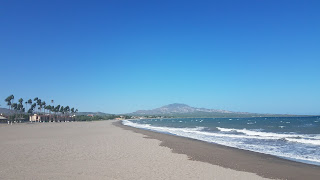 The was a strong steady wind blowing, as there has been every afternoon on the Sea of Cortez, and I ran into the three mexican cyclists we saw the other day at Bahía Concepción. They were sharing a 40oz bottle of Tecate and I sat with them and talked a while. They were from Mexico City and their spanish was fast, but I got the gist of what they were saying. We talked about how even to them, Baja felt like outs often country compared to mainland Mexico. The tallest and skinniest of them with big glasses was friendly and taught me a couple words I didn't know, including "va por dedo (literally 'go by finger') for "hitchike".

In the heat of the day we rested again and read our did various internet tasks, but ventured out again in the evening. We were hungry, but we have learned the largest meal of the day here is taken around 2, and if another meal is eaten, it is often very late, around 8 or 9. Constantly, our normal dinner time of 6ish is in between for most food establishments and we ended up looking for some shade to pass the time until they opened. 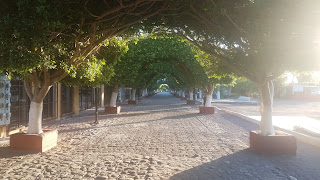 We had been told about a bookstore here by the folks we met at Bahía San Luis Gonzaga, called "El Caballo Blanco" run by a very elderly lady. We could not find the place on a map and thought perhaps the woman had passed, but lo and behold, we stumbled upon the shop and went in. A white woman with a walker welcomed us and I shouted if she had any copies of Steinbeck's "Log of the Sea of Cortez" and she lamented that a box of them was waiting at the border. Nevertheless, she began to tell me what she knew about the book and we ended up chatting with her for over an hour, the floors aaaand electric fan buzzing in the store cluttered with books. She was a very kind woman, and could have been anywhere from 70 to 90, with a withered body but very bright eyes and a lot of care in everything she said. She had been a special ed teacher for many years on an Indian Reservation in New Mexico, and opened this shop with her late husband after falling in love with Loreto and deciding to spend the rest of their days there. She would apologize for telling long stories "when it's slow around here I have no one to talk to." We had no problem with it and parted only when our hunger became too much to bear. 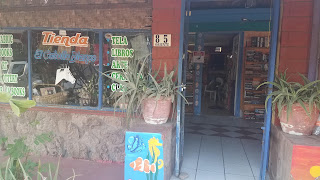 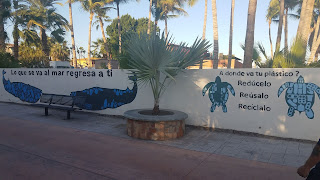 Dinner was 'Asadero Super Burro,' a famous grill we had heard about. It was an open air place with a corrugated roof and wood fire grill, making the whole place feel like a smoker. We had Papas Rellenas, a riced potato with cheese and vegetables baked in a tin foil bag. I was rellena de papa myself when we were done.

I observed a school mariachi band play in the second night of festivities for the founding of the city of Loreto outside the mission ("Head and Mother of all Missions in Alta and Baja Califirnia"). I stayed for a few songs but turned in early. My body was thankful for the rest.