October 29, 2019
I awoke with a gasp from an uncomfortable dream. Roosters were crowing outside and it was still dark. I set about getting ready a little shaken but determined.

Lluc would stay another day here. He wasn't clearly sick, he hadn't passed a movement in 2 days. There was coffee made and I hoped that would do it. Otherwise, I entrusted Abel, the caretaker of the hostel to look after him.

When I was ready, we had another hug, a bit more sincere this time. "See you in La Paz." Abel waved adiós after me from the iron gate as I rode down the cobblestones.

I rode out of town on a nice stretch of highway with real shoulder for a stretch before returning to the usual 2 lane, no shoulder to speak of as I got out of town. I would leave the area again here for 4 days and it must have known, because it gave me a real show. The Isle de Carmen and all of the Loreto bay some brilliantly, fading out into turquoise infinity, almost perpendicular to the vehicle ccliffs of the Sierra del Giganta that stood prominently like a fortress' wall. 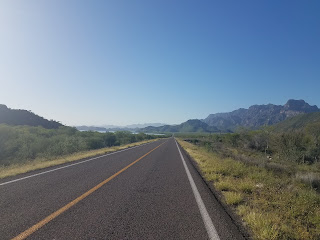 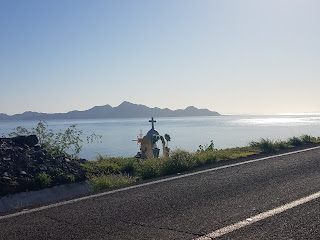 I came around a bend and saw another perfect bay. I know everyone has a different version of paradise, and this wouldn't be the first to come to mind for me, but I could easily see myself adopting it. A village huddled by the sandy shores of this teardrop bay, a lone sailboat anchored there. It was serene. 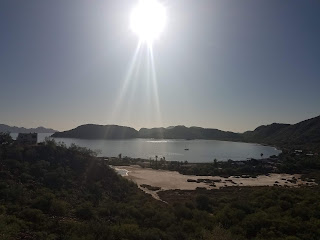 Less serene was Puerto Escondido, where yachts from California were moored aaaand streets had been buuld in a grid awaiting houses to be built. The first of this kind of high end development I've seen down here, but probably a sign of what's to come around Cabo. 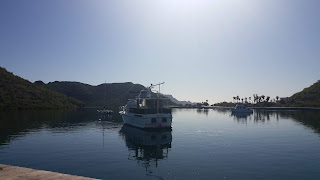 After 30 or so kilometers the road turned inland and upwards. They called it the Cuesta Ligüi (The Ligui grade/slope) and it was a hilla giganta. It wasn't too hot yet, but it was long and I crawled my way up. 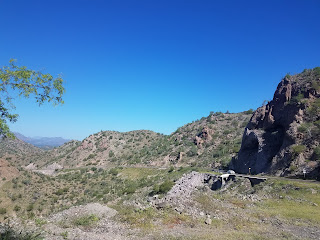 It leveled off eventually and continued through a broad open canyon. At a plave called El Huetamote there was a restaurant where I hoped to get water before camping, but I got there just before 1, long before I had anticipated, and found our friends Patrick and Martin, the swiss couple on the tandem there. 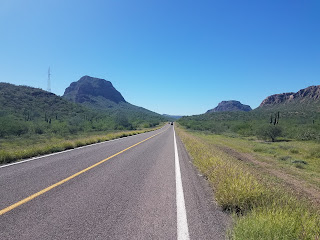 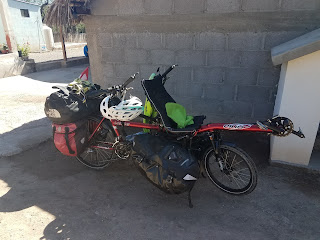 There restaurant was closed but full of people. I asked an older lady and it seemed it had to do with a saint. Many women were inside during a cake and talking excitedly, while the men sat outside, all with their big hats on, mostly in silence. I ate lunch with my swiss friends and talked for a while before they went on their way. Seems like folks I will run into again. When I was alone a young man brought me a piece of cake and cup of soda. I smiled and quietly accepted. 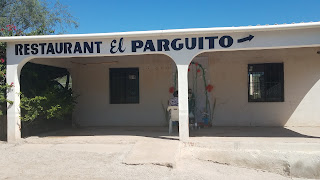 I rode for a while longer in the heat, and a motorcyclist pulled up alongside me as I rode. "Hola?" I said, but he just smiled a put out his first towards me. I bumped it with a mutual smile and he sped off.

I wanted to make camp at the edge of the canyon before the road emptied out onto the plain, so I was attentive to the landscape and noted a spot with particularly tall mesquite trees by an open bedrock arroyo. I found a gravel road and unwound a bit of barbed wire fencing to get through, but found s fine spot in the shade of those trees. It was obviously ranchland, the dirt loose and cowpies a plenty, but I didn't think anyone would bother me. 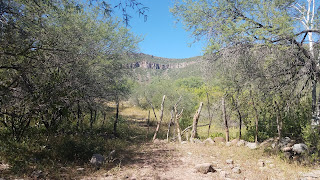 I spent the afternoon laying on my back sitting a song in my head and only ventured out after sundown to take a walk down the arroyo. There was a mud puddle with some greenish water there, and although I didn't need any, it gave me a sense of comfort and a feeling of proximity to a center to the camp. I observed the cacti and rocks in silence in the dusk. 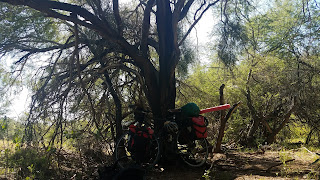 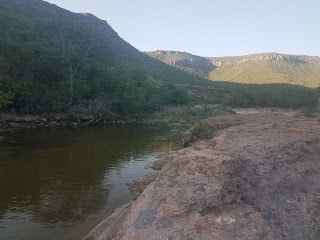 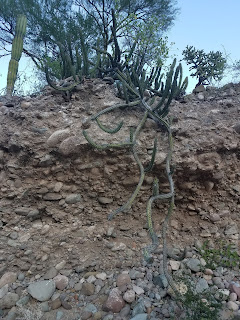 Dinner for one and then bed. Solitude feels just fine.