October 29, 2019
The sun rose late in the canyon. Cool air had settled in the bottom and I made ready with cold hands. I was slipping through the hole in barbed wire fencing when the sun breached the rim.

The road climbed steadily along the canyon wall while the canyon itself broadened, until the road reached the rim where both road and rim began to descend slowly into the plain. It was quiet there, and when I stopped to stand still for a moment and the wind on my face and past my ears stopped, all was still. 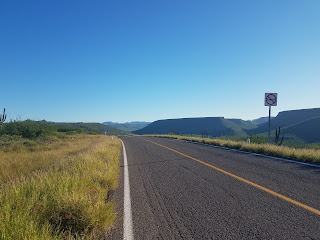 Soon I was in the valley and the road was very straight. I took a break only when it began to warn up, and I spied a shady bunch of bushes. 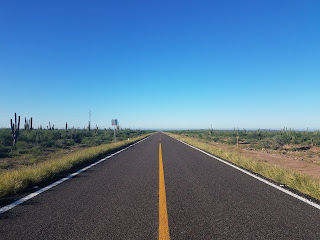 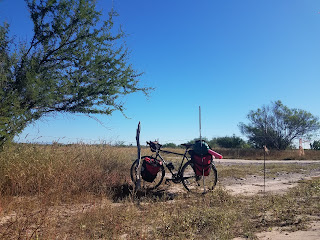 By mid morning I had made it to Ciudad Insurgentes, and my first priority was water. I had made it through the night and morning, but I was fown to 2 liters. I rode the strip along the main highway, which seemed to be the defining characteristic of the town until I found a water station with excellent hand- painted exterior. 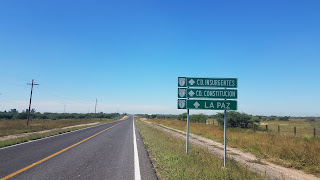 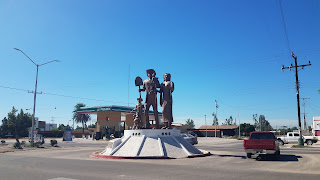 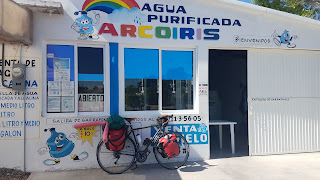 I filled up every vessel I had, loaded them aboard and hit the road going south.

I felt heavy with all thr water and the stretch between Ciudad Insurgentes and Ciudad Constitución seemed longer than it should've. But then again, with no landmarks to speak of in between the two, scale on any map is hard to comprehend. I rested beneath another tree by a bridge, flies buzzing on my legs, plastic bottles thrown here and there, cows hollaring in the field nearby.

Ciudad Constitución was the same schema-- a long palm-lined highway strip with stop signs every block. You may have heard of the "California roll," (which we observed frequently when we were there) in which a car with california plates slows at a stop sign but never stops. The "Baja roll" entails looking both ways and coasting clear through, stopping only for a cop or something literally in the way. So I rolled through town easily and found a clean looking cafe. 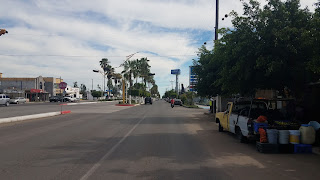 I had thought of staying the night here, but it was early in the day still and I wasn't in dire need if a shower (at least there was no one there to twll me I was), so I decided to wait out the heat and move along in the evening. Might save me some pesos too. My secret staff tucked away in my sleeping pad was getting thin and I had to make it last until Cabo. So I used the wifi while I had to to look at the road ahead (satellite imagery is awesome) and made some arrangements of a place to crash in La Paz. Lluc sent me a message that he had made it there that day and was staying in anothet hostel. Good. With not much between me and there, it very much felt like a race there, even though there were two more full days of riding to go.

There was a town in 15km and a small restaurant in 40 that I thought perhaps I could stay near. Other than that I looked like moatly farmland, fading back into desert farther away from town. The fields aren't so commodious for camping, because somebody owns them and they're well fenced, not too easy to hide in. So I figured I'd shoot for the restaurant and see what I'd find.

On my way out of town I stopped at a grocery store for one more night's dinner. Not being sure if there would be any place to buy a camping meal for one, I figured I should. Also my tortillas from Loreto were molding (not a clean tortillería I suppose), and going without toetillas at this point is almost like being without water. I let a street dog have the old ones.

Riding out of town the sun was sinking and I peddled hard with all my extra weight. Maybe it was the music I was playing but for those few kilometers it really felt like I was doing something epic. It all feels so regular now I tend to forget...

The road was busier here although I was still 200km from La Paz, the traffic was noticeable. I'm not exactly sure what it is about thr trucks down here, but they sound like old fighter jets, with violently percussive engines, such that it soundscas though the red baron in closing in on you when they approach from the back. At least you can hear them coming... and then WHOOSH 18 wheels and 2 tons of what the hell go flying by.

Sometimes I even get a honk and a wave.

I had made it about 25 kilometers when I started having trouble keeping my upper body upright and I was crouched over, braced on the drop bars. The soup I had planned for the night was starting to make me drool and I was realizing I was too tired to speak Spanish and convince a restaurant owner to let me camp out back.

The first ungated dirt road I saw I took and rode it a ways away from the highway, and then hid myself in the garden of cacti. Somehow, I stumbled upon a dry drainage of sorts where at least sometimes there is water, and the trees here were larger. I chose one and dtopped my things. It was a lovely spot. 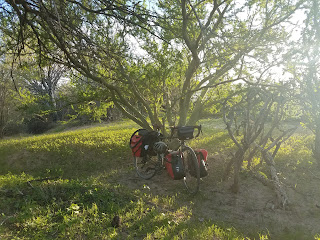 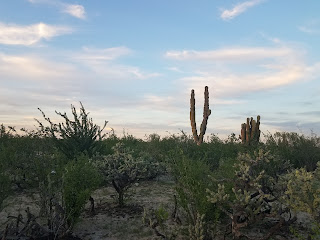 Dinner was made and devoured quickly, hoping that the salty broth would rehydrate me some. Whispy clouds had settled in and the sunset behind the wild shadows of the cacti mesage quite the display. By the time I was done eating , the stars were out and I retired to the tent like a fish flipping on a bed of ice-- cold out. 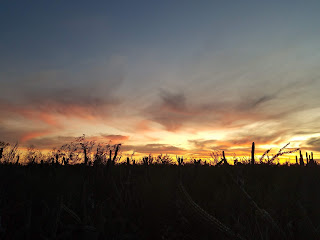