October 29, 2019
There was dew in the morning. It shouldn't have been a surprise with all this grass around and the valley so well irrigated, but I haven't had it for weeks, so it was.

I was loading my things and the sun was beginning to pierce the leaves of mesquite above me when I heard a cowbell. I stopped. It wasn't far and I listened again. It could be just a wandering cow but a cowboy could be nearby. I listened again and heard a horse neigh. I thought of how I might explain myself in Spanish, but it quickly became clear I'd be better of just getting out of there. Everything I own is a bright color,  so I stayed low as I finished the rig and then pushed it out through the brush in the opposite direction of the noise. I got to the road and hopped on, not looking back and skidded here and there on the loose sand of the tire tracks. See ya. 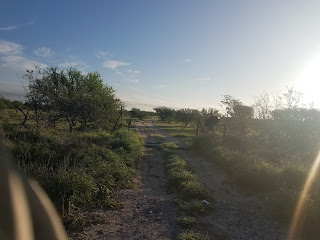 Back on the highway I realized I hadn't stretched, so I pulled over a kilometer later and made got over looking like a bafoon to the few passing cars.

It was straight, flat, and quiet. Some clouds hung in the sky and I was glad for a cooler morning. Out of the silence, I heard faint melody, scratchy and detuned. It approached quickly and I realized it was coming from the large loudspeaker adfixed to the top of an oncoming jeep. I've seen these rigs in town advertising this and that, but this fellow was simply seranading the desert with his favorite tunes on the distorted megaphone. ZOOM... and it faded. 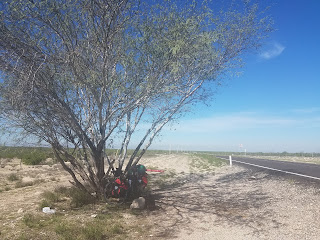 I came into Santa Rita, which seemed to be at the bottom of whatever valley or plain I was in, so immense I could not see what it was contained by nor outside any slope without reference. I found an open shop and asked for water. They only had small plastic bottles for sale, so I said no thanks and went back outside. The woman came out after a minute with one in her hand and insisted to fill my bottle. It was kind. 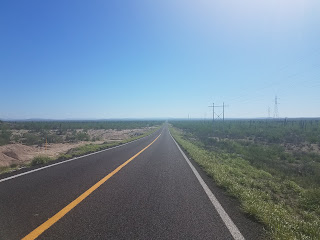 The clouds burned off and the road went on, only slight turns here and there. I was lost in thought and non-thought and hardly stopped pedaling until Las Pocitas. I expected this to be my last place to fill water for the day and maybe most of the next, so I turned off the main road and into town. The city road was insufferable, made of large flat stones cemented together, which had mostly turned bacj to sand, so I bounced roughly diwn the road and wobbled over the sand until I saw a small store and went in for water. Same deal here. With no other choice I bought a gallon and filled up all my vessels. The man and woman of the store came out to lik at my bike and particularly liked the noodle "como una bandera roja, no?" and my speaker; "Puede escuchar a música-- está contenta." Two delivery men were the dropping off some packaged treats and they joined in the oggling.

It was past 1 so I rested in the shade of the covered basketball court, something which most towns here seem to have. A young couple was on the bleachers so I kept to myself in the far corner. They giggled and talked, I learned my head against the cool steel columb.

I could have waited out the heat, but I decided I'd rather just get to where I was going-- wherever that would be. At the 100km marker from La Paz was the town of "El Cien." Not much going for it other than the Lonchería El 100, which was soon followed by Lonchería El 98, 96, and 91. 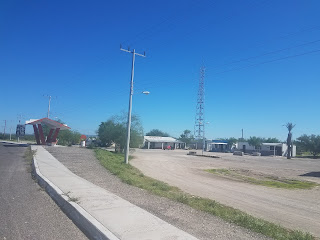 In the heat of the day I passed two highwaymen repairing a sign. Usually I would expect such fellow to give a solitary head nod at most, but they both shouted excitedly in unison: "Hola Amigo!"

The train began to diversify and there were mesas on the horizon. There was an arroyo before Lonchería el 77, which I eyed before pulling in. The woman was nice and she seemed not to care when I asked if I could camp the night down there, which was all the permission I needed.

I found another handmade gate and underground the barbed wire to key myself through. Most of the bushes around here are chest height, but down in the arroyo the were some larger trees and even a bit of grass. I scouted for a spot and drove the bike through the bushes to it. Some good shade and well hidden, though I hoped whatever animals had made the holes nearby wouldn't be coming home that night. 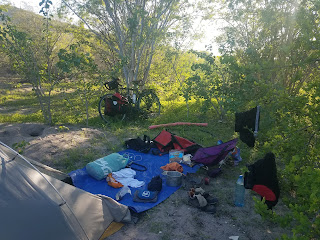 In the twilight after dinner I walked down over to the cliffs at the riverbed and put my hands on the rock. The were ancient shells in it and very fine sand, crumbling easily off.I cos see the strata and a thin fault and all of it washing away below my feet, frozen in motion without the water to move it. 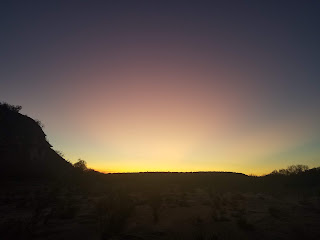 Stars came out brightly and the flies finally went to bed. That's my que too. Tomorrow: La Paz.