October 30, 2019
There was another heavy dew in the morning, and again, just before getting all my stuff packed, I heard cowbells. Oh boy... not again. It had been a scramble to find a way into the cacti and low trees yesterday, especially with all the sand, so it took me a minute to retrace my tire tracks back to the road. I got back to the loosely tied fence and undid it to get out, trying to remember how it was tied yesterday, but the cows wouldn't know the difference.

It was 77 km to La Paz according to the highway, but I figured it would be a little more since breaking into a major city always involves some extra effort on a bike. I didn't expect to see much of anything between here and theres except open road.

I had gone about 30km when the morning cloud cover was wearing off and I was looking for an easy place to lean my bike and sit in the shade. I came upon an empty-looking rancho thinking it might work, when I saw them coming: 3 dogs, two black, one brown, all head to the ground sprinting full power at me. I deal with a lot of dogs, and the ones that bark are just for show. The ones that just run are actually coming to get you. Without a stick or rock, my only defence is to bike as fast as I possibly can. I outran them just barely with them at my heels for about 500m before they gave up and decided I wasn't a threat anymore. Yikes. Gets my heart beating every time.

An army caravan of several trucks of soldiers passed me as I rested under a tree. They were all sitting in the back of puckups or standing up and holding onto the covered bed of the truck. How come soldiers don't have to wear seatbelts? 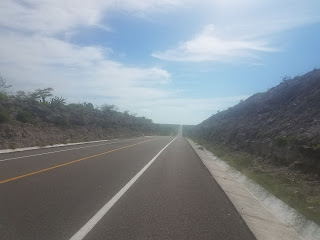 There was a steady breeze from the west. Yes, a headwind, but it kept me cool. The road was bouncy with mang small rolling lumps between this and that arroyo, but all very green. Eventually I can around a bend and hazy mountains came into view. After a while the ocean appeared. Before long, I came into El Centenario, just outside La Paz, which I can only imagine mean "the sentinal." I stopped at the first cafe I saw and got an internet connection to figure out where I was actually going. I only had 9 pesos in change left and I tried to buy something small to use the internet. They had a dulce in the fridge I don't know the name of but had seen before. A rice pudding of sorts in sweet cream. I asked how much it was-- "15"-- I was counting my coins (clearly not enough) and the lady just put out her palm, winked, and let me have it for 9. Thanks. 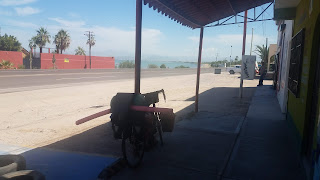 It was then I got the message Lluc had skipped town. I had expected to reunite with him here, but it seems he had gotten tired of hanging around and spending money, so he left for Todos Santos, where we were going to end our trip after getting to Cabo San Lucas. Oh well. I talked to him later that night and it was clear he was done. I don't blame him, once your heart is our of it, there isn't much pushing you to keep pedaling. I was a little bumbed, but there were no hard feelings, and as long as he felt accomplished and satisfied, that was fine with me. So, it's just mw from here on out. Up to this point, the actual objective and road there seemes pretty endless, or too far to really be fathomable. But now, with Cabo only 3 or 4 day's ride, I could see the end. 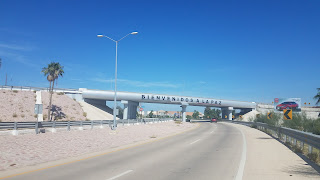 I was a staying with a warmshower's host in an outer neighborhood of La Paz, and I got the address and made my way there. There was no one home when I first got there, so I had to find another cafe to send the message that I was in the neighborhood. I returned shortly after and Tuly let me in. It was a cool white concrete home, spacious for how tightly it was fot between the other houses. She was middle-aged and I guess I wrote my spanish well in the email I sent her because she was surprised when it became apparent I wasn't fluent. She let me camp in the garage it seems I wasn't the only one. In fact, the place was a genuine hostel. There was an Australian woman who I had heard of in Guerrero Negro (a day ahead of us then), a Finnish woman who had attempted the Baja divide and couldn't make it (and she mushes huskies for 4  months in the dead of the Finish winter...) and italian man and japanese woman who had left their van at Tuly's for a year while they were going around the world, and who else but Riskia, the dutch lady Lluc and I had kept pace with for a few days in California. Baja had also given her hell and she had taken the bus from Mulegé. 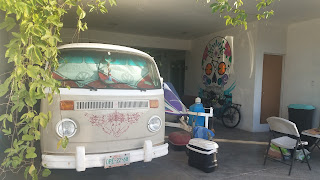 We ended up all cooking together that night and sharing stories from the road and then all crashing in our tents in the garage. A good ole international time. Tomorrow I'll take a rest day and prepare for the home stretch.