November 03, 2019
La Paz was something else for each of us travellers. For some, the end the line. I watched as Tayla packed her bike into a box and Jenna try and find a ride back to Tijuana to get a flight home. For others, it was a pit stop. Riskje had been there a week and would take a boat to the mainland that weekend and continuing on to South America. For me, it was like rounding third and headed for home.

I made ready in the morning and had real milk with my granola. I remembered two things: Mexican granola is far better than you'd imagine, and nothing beats real milk. We all exchanged some contacts and I got a good "hasta la vista" chorus from them as I left.

Getting out of the city wasn't so exciting. There were plenty of trucks and I went straight on a main road going south until it turned into the highway. The carnitas and tomale stands continued for a long ways out of town, even longer than the llanteras and other car shops. Eventually there was a military checkpoint after which it all stopped. Four lane road here with fine shoulder, and a tailwind, so I made good time past San Pedro to the turn off where both roads read: "Cabo San Lucas" one with "via larga" and the other with "via corta." I took the via larga. 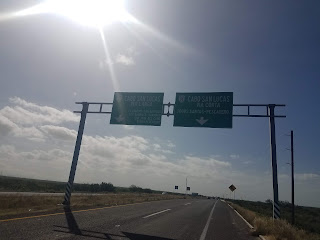 The road narrowed back to 2 lanes, no shoulder, and mountains began to approach. Somehow only a slight turn of the road had made tailwind turn all the way around into headwind. It wasn't so bad and I climbed up between green hills that from a distance could have been Vermont, or Central China, or any place but here. Yellow flowers were in bloom on the bushes, deep red ones along the ground. 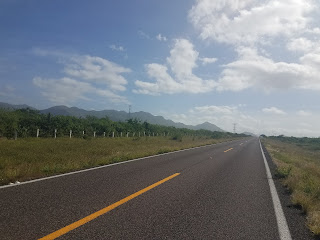 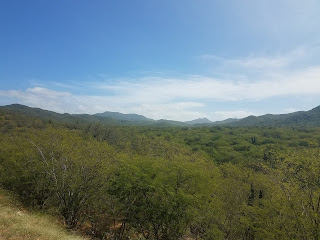 I came around a bend and viewed the valley below. A church facade painted red and yellow and a large smokestack stood out above a small town. El Triunfo. I descended and came into town. Earlier than I had expected, just before noon. With plenty of time, I figured I'd walk around and see what the was to see. 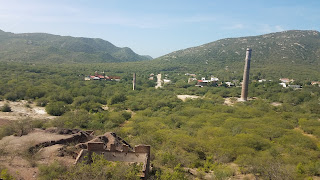 There was one main strip and no square. Certainly not a mission town. A few bars were open that seemed catered towards the people on route to Cabo (I wasn't exactly what they had in mind). In an old building on the right there was a woman at a desk by an open door that said 'Museo de Música. Inside was a line of old pianos and organs. I went in and the woman had me sign a book. The first of the day. 'It's been very quiet' she told me. Most of them were beaten and warped from many hot and humid summers, but mostly they were facinating to think about how they had gotten there. 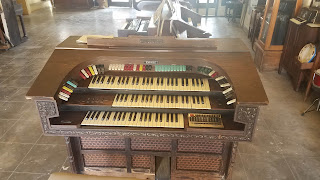 I walked over to the church and read a plaque. It had been an early silver mine, claimed as early as the 1750's, but only really picked up in the 1890's when a foreign company "El Progresso" bought the claim and intensified production. They had built the church, and the massive smokestack, which I was drawn to next. Clearly the town was very proud of its "chimney." There were signs a plenty pointing towards it, and a sign by its base described recent efforts to repair and stabilize the structure so it would not topple over. A school mural nearby depicted happy children playing sports with it in the backdrop. Contrary to local legend, it was not designed by Mr. Eifel. When the mine started to run out in the 1920's, most people moved to La Paz, and took most things with them, even the bricks. All that was left of the old mine town were foundations. Town itself along the highway was clearly the remnant of something long gone. Plaster storefronts peeled revealing past layers of paint, most of them empty. Streets were paved in stone that lead no where and most houses were shrouded in greenery with goats and chickens running about. 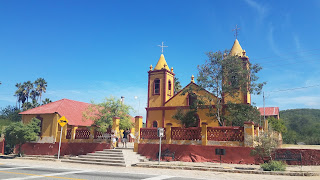 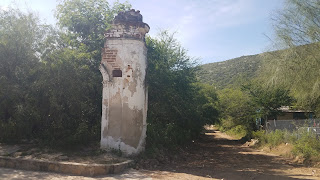 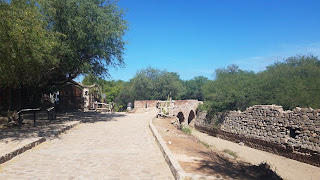 I walked around for a while longer until I found an Inn, where I thought I might bargain for a place to camp. 200 pesos was the price and shec wouldn't budge, so I asked if she knew some place else I could set up my tent. 'Go down the road along the arroyo. Sometimes cars go there but you can go on the side somewhere,' or at least that's what I got. So I did and soon enough came across an old stone bridge. The tire tracks in the sand went through one side while the other was empty. There wasn't too much trash around, except pieces of a TV on one side. A few goats perf at my from-- behind a fence. I laughed at the notion of going full- on troll and camping under the bridge, though we'd considered it before a few times on the trip already. Looked like this was the place. 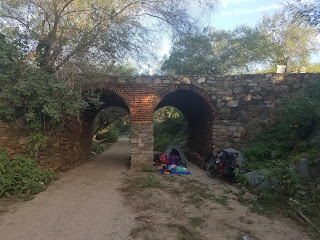 I left the bike and asked for water at a cafe in town, stopped for a while on a bench to write, and then walked back to my bridge (it hadn't taken long to become attached). After La Paz, its nice to be in a town you can walk every street of in just an afternoon.

Dinner was troll slop (rice and beans) and the goats nearby where periodically overwhelmed with curiosity, rushing over to see what I was up to. The sun set and from my tent I could heat every dog in town barking away at nothing. Church bells marked the hour. Crickets chatter. When a car or two drove over, a little dust sprinkled on the tent. A funny view into the life of a town from down here. Maybe trolls don't have it so bad.