November 03, 2019
The last day? How could it be so? I contemplated the notion as I rose to pre-dawn light in the abandoned soccer field. Not knowing what awaited me in Cabo San Lucas, it was hard to feel like I was getting closer. More than that, once I got there, my plans were uncertain. I hadn't a place to stay and I didn't really feel like staying there for long, from what I've heard about Cabo. Still, I had miles to go before I could answer those questions. Nevertheless, they remained on my mind through the day.

I packed and made my way back to the town square where the man at the abarrotes told me there was a free wifi connection. Can you believe that? This is the 21st century. I sent a message or two back home and then split back up the hill that had taken me down into Santiago.

The mountains were crisp this morning, the grey rocks of their jagged tops defined against their green carpet, flowing dosn onto the plain.

Almost immediately I passed a sign: Tropico de Cancer. Wow. I guess I made it to the tropics for real. It got me thinking. If we started at roughly 48 degrees of Latitude by the US/Canada border, and we are now at 23 degrees, we've travelled roughly 25 degrees of latitude, which if my global positioning knowledge is right, is more than a quarter of the distance between the North Pole and the equator. Not bad. 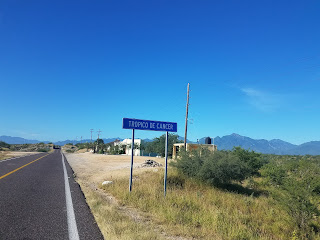 The road was engaging-- or should have been-- lots of small hills and valleys, going down into each arroyo and up again to the next one. The Sierra de la Laguna continued to be stunning of the West. The sun was clear, the trees green, and dirt orange. Somehow I was deep in my head, allowing thoughts of 'what's next' to drift in. Trying to imagine home, trying to imagine a job, wintertime, and such things that seemed till now ao far off.

I hardly stopped all morning. I could have, plenty of nice shady trees about, but I felt compelled to keep going for some reason, and before long, there was a cluster of roadside shops; the usual firsts (llantera, tacos de cabeza stand, etc...) but there soon appeared rarer sights, as in a real bus terminal and veterinarian's office, and then I heard a plane. Its nkt an unfamiliar sound, but I realized it had been weeks since I had actually heard one.

I crossed another arroyo and came into view of a long strip of businesses on the highway next to the airport. It was San Jose del Cabo, but certainly the outer edge. It was rough riding through here. The stores were right next to the highway, and the sand prohibited any orderly parking, so cars were parked or just stopped in every ditection, pulling in and out rapidly. The highway was packed with busses and trucks. Only two lanes in either direction, but the shoulder appeared to be a valid option as well, which would've been fine with me if it hadn't been covered in sand half the time. I wove in and out of traffic chassing leaking buses, overloaded trucks, and sagging sedans. 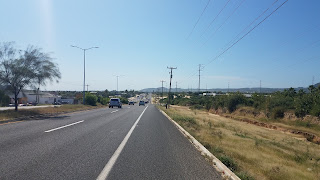 At length, palms appeared and the highway became clean. A hotel appeared, and as the road turned gently to the right, the ocean appeared and suddenly there were hotels everywhere. Gigantic and luxurious ones on both sides. I was looking for a place to pull over and rest, but everything was gated, paved, controlled... Missing those shady trees about now. I saw a sign for Playa Costa Azul and turned off to an underpass. Underneath the highway in the shade there was a crowd of mexicans by a taco stand. A local spot, I 'spose. I rested by a painted wall and spotted a truck with 'cocos frios' next to the tack stand. I had made it to one of the Cabos, I suppose I could treat myself. I slurped one down on the beach and enjoyed every last bit of the tender meat inside. A coconut on the beach in November. I laughed at myself. I really am on vacation. 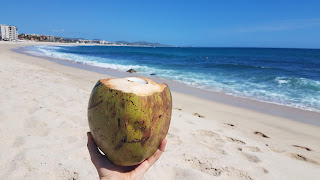 I took a long rest. I hadn't heard great things about this stretch of road. It was only 25km to go, but it sounded like one long strip of resorts. Well, I've been through worse.

Baja really made me work for the last bit of land. Those 25km were some of the hardest I've done on the penninsula. There was a fierce headwind coming from the Cape, the traffic was constant and fast. There was a shoulder, it was but covered in junk, gravel and sand. The hotels grew ever grander and more outrageous outside of town. True momuments to affluence and luxury. Colossal buildings of austere modern architecture, sprawling well-irrigated grounds, and each with an enchanting logo that proclaimed their status: "Cabo Real" "Paradisus" "Grand Velas"... Outside of one, a car was flipped and a traffic jam stretch over the next hill. People stood from the windows in the resort and watched the police and paramedics respond.

I was wired and worn thin when I came under an underpass and I saw kites over the water. Another look and I saw it: El Arco. Oh boy, did I give a hollar. Nothing yet had given me the rush of achievement, but knowing the shape of those rocks from photos got it through to my head that I had in fact ridden a bicycle here. They were bigger than I thought, and truly epic. Worthy of the name 'Land's End.' 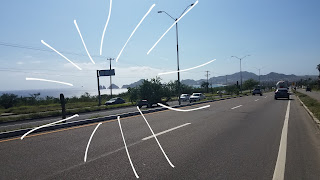 Cabo San Lucas was a veritable disneyland. There was a strong "Mexican theme" to the place, but it all felt invented. It resembled nothing of the Baja I had ridden for three weeks. Tequila bars and over-priced taco restaurants all shared the same moustached, sombrero-wearing cartoon man. The golden arches of McDonalds showed what the true colors of this place were. 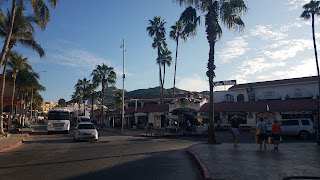 I saw a chalk sign on the sidewalk: Beds: 250 pesos. That must be the cheapest place in Cabo. I went in. It was a hostel, and the staff was friendly so, I pulled my bike in and got a bed. I was literally dripping sweat, even after the guy at receltion had explained to me everything. I put my things down, put the bike through a window and into a back alley orlf sorts where I locked it to a propane tank. I showered and I was still sweaty. Oh well. 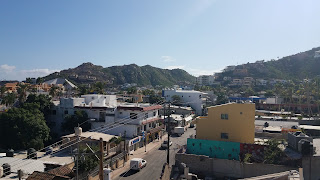 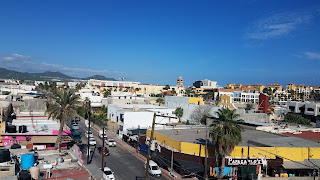 The McDonalds on the way in had planted a seed. I wanted a milkshake. I would have a milkshake. There was no way around it. So I made like a good gringo and went to the food court of the mall and had myself a burger king milkshake. Food courts are usually my personal hell, but in this case, it felt like more of a "when in rome" kind of situation.

Outside it was a little after 4 and the sun was getting lower. I decodid it was time to do what I came here to do and proceed with the ritual. To the arco! I walked over the the point where there was a public beach, crowded with people this time of the day. I walked along and looked for a trail out to the tip but was surprised to see only barbed wire fence. But, two boys about the age of 10 were climbing the rocky slope nearby and seemed to be circumventing it. I followed and caught up. "Este sendero va al arco?" The smaller chubbier one responded. "Si, se puede," he said, "pero es peligroso," pointing at a steep rocky cliff where the fence blocked all other possible routes. I tried to think of a way of telling him all the dangers I had faced to get here, but all I could come up with was "Mi nombre es Peligro." 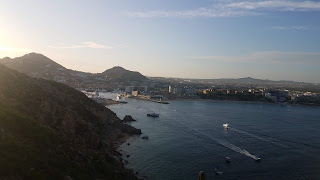 So I followed the rough path, holding onto the chainlinks above the cliff, loose rocks tumbling and pulling cactus spine out of my flip flops (I wasn't anticipating a hike). The dance music of the party boats in the harbor resounded loudly. It took me 20 minutes or so amd the sun was diving deeper, but at last, the beach came into view. It was stupendous. Creamy frothing waves crashed on the sand and the tall sandstone bluffs cur sharply up towards the sky. Little party boats bobbed around the cape. 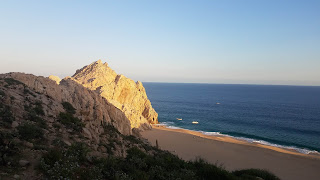 A last strip of sunshine shone at the edge of the water and I ran down the slope to it. Somehow, out of all that chaos, there was no one else on the beach. There was a hilarity to the place, and I was on my knees, staring at it all, mystified. 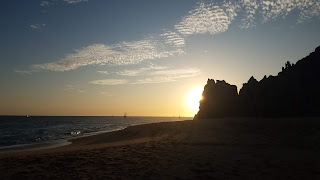 I got up and stood on course, wet sand, letting the waves wash up and around my ankles. They were strong but playful waves and the water was soothing. I felt agknowledgement when the water touched my skin and that ole ocean knew exactly what was on my mind. It had a motherly presence, loving and gentle, nurturing and abundant, but powerful and strict. It was the first time I had felt the ocean in this way, so personified, and it opened up a part of my heart I wasn't expecting. I sat in the sand crosslegged, watching the sun fall over the wavers, fall over the sand and I let out a laugh that turned in a cry, what for I couldn't say but it wanted out. A great release was happening and I didn't know how to feel. I lay back on the sand and just looked up at the rock. I did it. I made it. 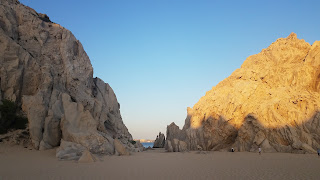 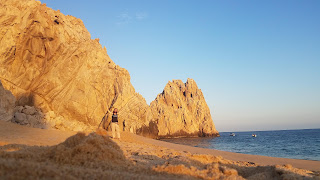 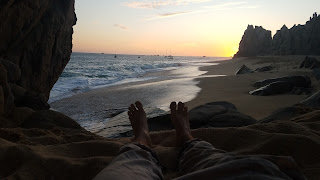 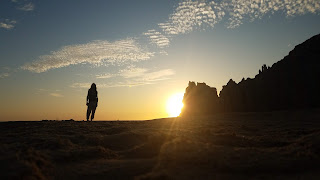