The numbers hardly capture the journey, and neither can the photos and writing in this blog, really. Though we rode the same roads the whole way down, even Lluc and I have had entirely different trips. Given the bias, it's been as best of a document of 'how it was then' as I could supply, though its meaning to me and to others is sure to change.

I reached the Arc of Cabo San Lucas on November 2nd, only a day after we had anticipated arriving there in the itinerary we wrote back in Seattle. I wouldn've pictured getting there alone, but alas, our jouney does not really end in Cabo. Old friends may be apart or together, but they never lose sight of each other. It wasn't a place I was looking to spend too much time, and Lluc had already been cooling it for a while in Todos Santos, so the next morning I got back on the bike and rode another full day, Northwards along the West coast to Todos Santos. We were reunited in the evening and it was fine. I'll call this road's end. We would spend a few days here together before making the trip home via jetplane.

Something peculiar happened after I stopped riding: My mental fortitude which I had built over two months to allow me to keep going and going and going was released, and when I agknowledged that I was in fact, done, I suddenly felt how tired I was. I became weak and feverish, dehydrated, with a poor stomach. I was helpless and spent the best of three days on my back staring at a ceiling fan or a mosquito net. I let myself accept the notion, 'that was really hard.'

I my daze, I sifted through a lot of thoughts: all the towns we'd been through, all the places we'd camped, people we'd met, all the dirt, all the sweat, all the things that seemed important then. I thought aloud again; 'I did it,' and it left a void that could only be filled with 'why?'

The answer I had given myself before starting was more or less 'because I'm young and I want to,' which is not too far from the reasoning for my last bike tour across the country. But they could've have been more different: I had ridden from my college through my own country, back to my front door-- the most comfortable of places. This time, every day we moved farther away from the familiar: towards places I had never been-- places I had never even heard of, with people that spoke a language I only had a marginal grasp on, with different rules (sometimes no rules), different rocks and birds, bugs and plants, different conceptions of property, wealth, and travel. The only thing that was constant was the ocean, a thing so much bigger than all of that-- I didn't think I could have a personal relationship with something so big. I took me two months to be proven wrong.

As I wrote before, when I got to El Arco and let the water rush over my feet, I immediately felt the gentle presence of the ocean as if it had laid its hand on me. It was only brief but I recognized the sensation from all the other times I've had that kind of interface with nature. I felt the calming and sustaining sense of the water, but also the forceful and tempestuous power of the ocean and it formed a complex personality that was very real, and familiar, and in that moment, undeniably motherly. Most surprising was the way I felt my presence and my effort was recognized: it knew exactly what I had done and understood why I had done it, even if I didn't.

Where I sat down on the sand and watched the sun set over the waves there, all the emotions that I had kept restrained over the trip wanted out and they came out jumbled together: I was energized and exhausted, lonely and accompanied, hilarious and sorrowful. I hadn't time to sort them all out, nor did it appear they could be seperated. In Todos Santos, the release continued, though far more viscerally. I was sweating with chills, hungry and nauseus, worn out and restless.

Again, the 'why' came to me. Why is it I have so many supportive friends and family that let me do this kind of stuff? Are they equally idealistic as to be just as blind to the dangers? Maybe they do know, but were young once as well and know what there is to be gained by stepping into the unknown. Or they know better than to step in front of me when I get my mind hooked in something. However, that kind of leap has always proved worthehile for me, though I can't say I've ever gone this far out without the support of some kind of institution, be it a school, a tour or even simply a hotel.

In the evenings in Todos Santos, I could hear the waves crash beyond the crickets. All this time and still there. I had gone into this endevour with a passion for food, public lands and conservation, but not a lot of expertise on fisheries management or marine biology. I had learned a tremendous amount from the people who were so kind to share their knowledge with me. It was easy to talk about and conceptualize it when we spoke, since many of the issues resonate across conservation fields, and they were all pragmatic, passionate people. But there was a kind of knowledge I was downloading now, even in my stupor, that I could not get from those conversations. The balance of the planet is changing so quickly, even the experts have trouble predicting what the ocean will be like at the end of my lifetime-- about as much trouble as I have predicting where I'll be then. I had leaned into a deep uncertainty, and rested in its inevitability, knowing I would go on with the chance I would not resemble my original self at the end. If I could feel the ocean as I had at El Arco, then certainly the ocean felt this same uncertainty. Perhaps I had internalized its feeling through some sort of inter-kingdom communication. As painful and strange as it was, it felt like a gift and I accepted.

Now, flying at 30,000 feet, covering what took us two months in half a day, its hard not to feel a little cheated, but the world moves at a faster pace than bicycles, and besides, these people don't know what they're missing. Something more strikes me about these people: they're just as much a part of the ocean as I am, if they know it or not. There are many levels of awareness of this idea, many even deeper than I have achieved, but if there is any visual symbol of our oneness, it's big blue out there. You are what you eat, and if you ask me, surf and turf alike should be taken as communion. It takes intentionality, and there's a whole lot of forces who want to make those choices as impulsive as possible, but we grow more empowered and informed every day, and it feels good.

I couldn't end this without thanks, deeper than the sea itself: To all those who gave us shelter, water and food, warrented or unwarrented. To all those that encouraged us with words, waves, or honks. To all those that offered us their wisdom, on the route, the bikes, or the seas. To our family and friends who wrote often, willed us to safety, and awaited our return. To the ocean. Thanks. 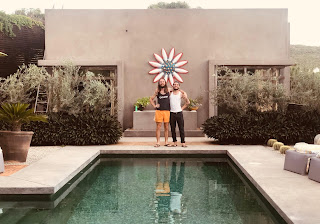 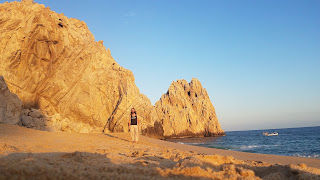